Today we celebrate the Baptism of Jesus Christ. This feast is similar to that which we celebrated last week. In fact, this feast is also called: “The second epiphany or Epiphany according to St Mark.” Throughout this year of Ordinary time, we shall be reading from St. Mark’s Gospel, and here we can find three great moments of revelation. At the beginning, Jesus is baptized, and the Father’s voice declares to all, “You are my Son, the Beloved: with you I am well pleased.” (Mk.1)  Half-way through, Jesus is transfigured, and the voice tells the disciples, “This is my Son, whom I love. Listen to him.”(Mk.9) At the end, Jesus dies on the Cross, and the centurion declares, “Truly this man is the Son of God.”(Mk.15)  What then does Jesus want to tell us today through this feast when he is revealed by God- this feast of his baptism?


One day there was this drunk who was walking home very late in a very dark street. Because of his tipsiness, he did not realize a big hole ahead of him. So obviously, he fell into it. When he came into his senses after a bit, he realized that the hole was too deep and he would not be able to get out by himself. So he started shouting for help.  Luckily another man was coming along that same street and heard his call for help. The man shouts back: “Hello… are you the one shouting for help. What happened to you?”  And the drunk replies: “Yes, yes, you see my friend, I was walking home and fell into this hole. And it’s too deep for me to get out by myself, so I shouted for someone else to help me.” And you know what the other man did? He jumped straight at the hole and now finds himself beside the drunk man. The drunk says: “Oh ok, I may be drunk, but I’m not crazy, why do you have to jump to be with me in this hole?” The man said: “You see my friend, I heard your shout for help which was not so much heard up there. So now I’m here to help you. I will now shout together with you so we can be louder and people will hear us better.” Ok you may call this man crazy.
But you see, that is the same thing Jesus Christ did for us when he decided to be human like us. Jesus jumps into this hole where we are all need of saving in order to join us- to shout out in prayer to the Father together to save us. “And the Word was made flesh and dwelt among us”- he stayed with us. A beautiful image is that which Isaiah gives us today: “For as the rain and the snow come down from heaven, and do not return there until they have watered the earth, making it bring forth and sprout, giving seed to the sower and bread to the one who eats.” That is what Jesus shows us today. He comes from above to this hole called earth and stays with us to give us life. That my friends is the effect of being baptized in Him.

Whenever I do the Saturday baptisms, I always remind the assembly that for the Baptism to be truly efficacious, there has to be faith. That means the one being baptized must believe in this sacrament. But then if you ask the babies: “Hey, do you believe in one God?” they would just stare at you with those big googly eyes as if saying: What in heaven is this guy asking?
And so the burden now falls on the godfather and godmother to answer the questions for the child. So whenever I ask that question: “Do you reject Satan and all his works?” I am always amazed at the resounding “I do’s” of the godfathers and godmothers. But then as the children grow older they have to answer that question themselves. And today, sometimes when we ask young people the question: “Do you believe in one holy catholic and apostolic Church?” It’s met with half-hearted answers like: “whatever? or “seriously?” or “ask it in facebook and I’ll just like it.” We complain that being in the Catholic Church gives us so many obligations to do and so many things to comply with. We find it too hard especially when it inconveniences us and many times we give up those promises we made in our baptism. We have forgotten that Jesus came and became man for us bearing that limitation, those accusations, and those sufferings at the cross, just to save us and to have our sins forgiven- all because we were baptized in Him.

There is this film “Unbroken” which tells of Louis Zamperini, an Italian immigrant who came to America as a boy. He almost gave up on life until he found a passion in running. At 19, he represented the US and ran the 5000 meter in the 1936 Berlin Olympics. There he won the hearts of the people because not only was he the youngest qualifier in this event, but also because at the last lap of that long 5K race he was at the end of the line but he didn’t give up, and ran the fastest lap ever to reach 8th place. But you see, this final lap of 56 seconds was record-breakingly fast to catch the attention of Adolf Hitler, who insisted on a personal meeting and shook his hand. Remember Hitler only congratulated the German medalists – he didn’t even congratulate American Jesse Owens who won 4 golds.

Three years later World War II erupted, he became a soldier and was captured by the Japanese. For almost three years he was beaten up without a reason by the Japanese camp commander, he suffered the torture, yet he never gave up until the war ended and he was able to go back home. And after more than 50 years, at 80 yrs of age, he was invited to run again in the Olympics – this time to bring the torch in Japan near the place where he suffered his captivity. And there he met with his former captors and forgave them all. 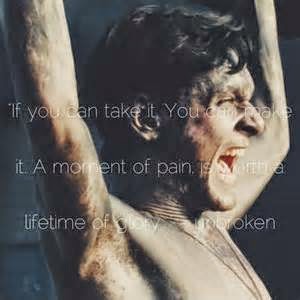 As we celebrate today the baptism of our lord Jesus in the Jordan, let us thank God for the gift of salvation through the grace of baptism. Let us also ask him for the grace to keep us faithful to our baptismal promises.

"Of journeying the benefits are many: the freshness it bringeth to the heart, the seeing and hearing of marvelous things, the delight of beholding new cities, the meeting of unknown friends, and the learning of high matters." (adapted from Muslih-uddin Sadi)